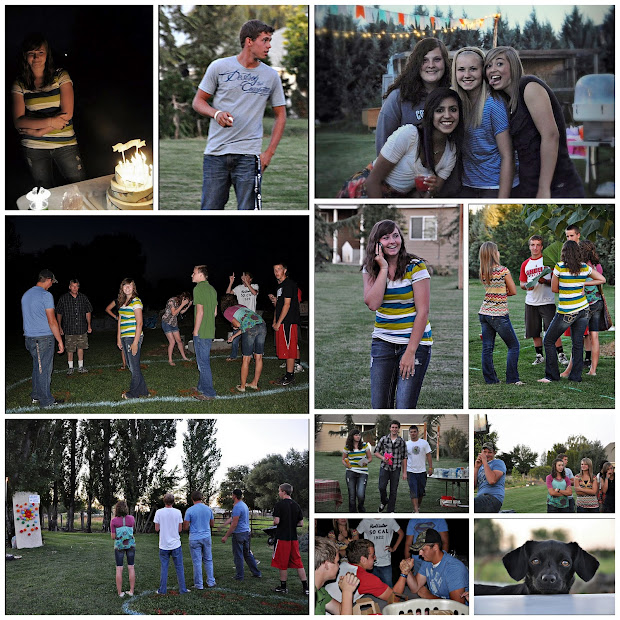 Planning a party for teenagers can be tricky. You can't be too childish or they think it's not fun, and you can't be too serious or they think it's not fun. There needs to be competition because guys thrive on it. So we decided on a backyard carnival theme and it went over fairly well. Madeline was worried that her friends wouldn't want to play any of the games, but for the most part they did. It helps when you throw in fun things like an egg throw, balloons + darts, and arm wrestling. Guys like those kinds of things. Those boys went through 10 dozen eggs in a matter of a few minutes, tossing them at a large board painted with a clown design.

They did NOT want to do the photo booth, however.
Oh, well.

We set up several stations around the backyard and decorated with lights and bunting.
+ there was a cupcake walk, featuring coconut cupcakes made by Danyelle, that were both delicious and adorable, decorated with little mustache picks that Lindsay made.
+ we had a basketball hoop in back so that they could shoot hoops
+ balloons and darts
+ egg toss at a large clown painted on a board [put up a tarp under and around for easy cleanup!]
+ arm wrestling

The other element to a great party is food.
We had the following:
+ popcorn machine
+ snow cone machine
+ cotton candy machine
+ Italian cream sodas
+ a candy table
+ and a delicious chocolate peanut butter cake made by Alicia, decorated with the bunting design.

It was a ton of work, but also so much fun to watch all the kids enjoy celebrating Madeline's 16th birthday.
We'll be planning another one next year when Jocelyn turns 16.
She's already counting down the days.