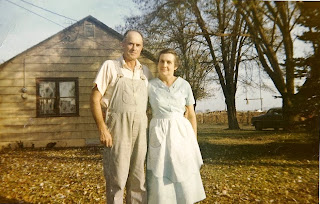 This is a picture of my Grandpa and Grandma Mathews. Eldon and Dorothy. [We call this picture Mathews Gothic because it reminds us of this classic.] I thought of my grandparents often this past weekend as I looked around and saw all that they had created. How happy they would be to see all of their children, grandchildren, great grandchildren and even a couple of great-great grandchildren.

There were 185 of us who participated in this Mathews Reunion and I was reminded what a special family this is. Everyone gets along, there is no foul language spewing, no alcohol needed to have fun, no cigarette smoke to offend anyone. Just good, clean, fun.

Here's a lineup of what we did this weekend:

We started the weekend off with approximately 65 adults/youth filling the various areas of the temple. It is the perfect way to start the reunion and so nice to be in the temple with each other.

After the temple, we had an adult dinner in my parents backyard, where 95 of us enjoyed delicious food under white twinkle lights. It was perfect. We played the newlywed game with four of the newest couples to have been married, which is always a riot. Hilarious.

We held our traditional family fun run [5k] at Howard Amon Park. There are serious runners in this family and so there are medals for the winners of each age division. Some people ride their bikes, others just stroll along and enjoy the beautiful river. We end the fun run with muffins and juice, and it is one of my favorite traditions.

After the fun run, some of the men went golfing while the rest went back to Aunt Phyllis' where there were children's activities available. Aunt Kim taught some of us how to knit. Then we had lunch and some were off to kayak on the Columbia. We had arranged with the City of Pasco to provide us 5 hours of kayaking and so there were 4 groups who kayaked. Everyone had a lot of fun.

Meanwhile, back at Phyllis' the kids continued to swim and play. Cousin Staci taught us how to make dinner/cinnamon rolls and this is where the only mishap of the weekend came in. During Staci's class, a child came running in yelling that Staci's daughter had broke her arm, and so the class abruptly ended so that Julia could be rushed to the emergency room.

We had pizza and rootbeer floats at a nearby cousin's [the Wright's] home and then we were off to Carmichael hill to go ice blocking. I haven't slid down that hill on a block of ice for about 17 years...I forgot how much fun that is.

After ice blocking, we headed back to the Wright's home to watch an outdoor movie, complete with a popcorn machine and concession stand. It was so much fun to watch a movie under the stars with my kids.

A few people began the day with an early morning bike ride around the Tri-Cities, and others participated in a bootcamp, led by a cousin who is a personal trainer. Then we had a delicious breakfast cooked by the 6 brothers and the Henry's.

After breakfast, the twins [my dad and uncle] led family on a bird watching tour near Columbia Park. Then it was time for the much anticipated Amazing Race II. We held the amazing race last reunion, two years ago, and this one was touted to be bigger and better. And it was. It was also harder. It took some teams 3 hours to complete the race, but everyone had fun!

Finally, we ended at Uncle Richard's home to have a BBQ and our traditional auction. This auction is one of my favorite things about the reunion. Everyone donates something, a good or service, a handmade object, a sentimental something. Then we all bid and bid and the money that is generated from the auction helps pay for the reunion.

I am so grateful to belong to such an amazing family, and I'll be counting down the days until we all meet again.