My 2 Cents on Twilight 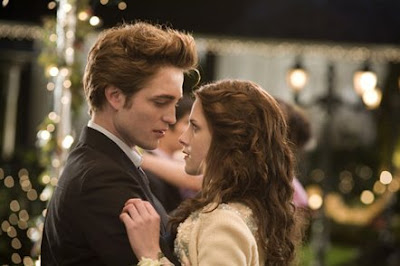 *** Of course, this review has spoilers. You should also read the reigning queen of movie reviews take on the movie here, I love her review, although I disagree with her on a couple of things. Oh and this post will be insanely long. Hey, I warned you.

Thursday night I went to see the midnight showing of Twilight with Madeline, Jocelyn, my mom, my friend Tiffany, her daughter Tailen, aunt Sandy and Jenesa, Lydia, Brandi, Emily, and Gabby. It was a blast standing in line with the girls who were so excited for the movie.

I went into the movie knowing that it could never measure up to the books, but at the same time trying to be hopeful that it would be great. By the time the movie was over, I felt like I was in shock and was hugely disappointed. Sure, there were things that were awesome about the movie, but overall I was so annoyed. They just changed a few too many details and the special effects were cheese-ville. Plus the audience that night was just plain RUDE. They laughed and giggled and snickered at ALL the wrong places and I just wanted to slap them all.

But, after sleeping on it, I had simmered down a bit and knew that I just needed to see it again. So my wonderfully amazing husband agreed to take me to see it again on his birthday. He's so sweet.

Can I just tell you......it was like watching a different movie, a much better one, the second time around. I was no longer in shock when the cheesy special effects appeared, and I was able to get past the story changes and just enjoy the chemistry of Edward and Bella. Brandon really enjoyed the movie and has even said he wouldn't mind seeing it again.

I absolutely loved the way Edward was portrayed (with the exception of two scenes, I'll get to that in a minute) and I thought Bella was PERFECT. And I honestly don't understand why people were annoyed with her melancholy demeanor...that's exactly how she was in the books. She was depressed to be living in Forks and leaving sunny Arizona...she was rarely happy in the books, and I thought that they drove that home quite well in the movie. Everything about the way Kristen Stewart played Bella was perfect for me.

The worst scene of the entire movie was the first Biology class where Bella's scent was apparently repulsive to Edward and caused him to clutch his face and look as though he wanted to hurl! What??? They got it ALL wrong on that scene. Sick and wrong.

The other scene that just annoyed me was in the forest when Edward was jumping around after Bella has told him she knows that he's a vampire. The special effects there were so horrible and at one point it looked as though he just dropped from the sky...so weird...and I hated it.

Here are some other things that annoyed me so much:
Here's my list of the things I absolutely loved:
I am thrilled that the movie has done so well (70.55 million, not too shabby, eh?) and that they have already green-lit New Moon. But I have to plea with the producers...PLEASE GET BETTER SPECIAL EFFECTS! Please! It will be crucial to this next film to improve the effects.