Last Thursday, Brandon and I headed down to Utah (my brothers call it Church-tah) for a quick weekend trip. He was excited to run another 100 miler, and I was excited to visit friends. He started his race in Logan on Friday morning bright and early (actually it was dark at 6am) and after he started I drove down to Provo to visit Courtney and stay with my dear childhood friend Jennifer and her family.

I also experienced a couple of firsts when I met Noelle for lunch at Cafe Rio. I knew I would love Noelle, she is so awesome and made me laugh and laugh and laugh. I had no idea how much I would love Cafe Rio. I really wondered if it would live up to the hype...it did. Now, if I could just find a delicious sweet pork barbacoa salad to satisfy my craving. 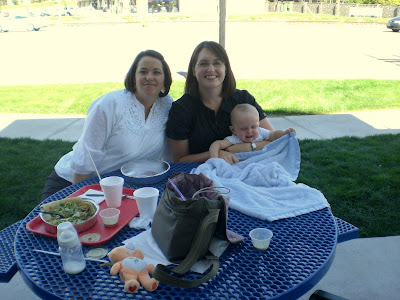 My visit with Courtney was nice. Her life right now seems overwhelming to all of us who are watching, but she handles it all in stride and I felt a strong, peaceful sense of faith in her home.

Then I drove around the corner to Jenn's home (she is in the same ward as Courtney.) Jenn and I have known each other since 3rd grade. There were summers as tweens when we were inseparable. I loved having the opportunity to spend time with her and Aaron and their children. We stayed up until the wee hours of the morning talking about politics, and about Aaron returning to BYU as a 32 year old freshman. Thank you Cobias for your hospitality. 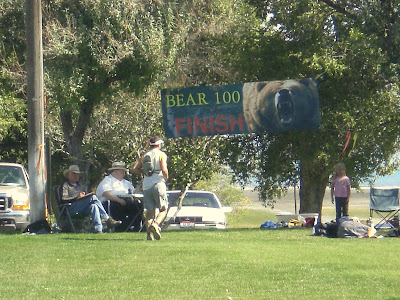 Saturday morning I was up early to drive back up Logan canyon where the race was ending. Brandon crossed the finish line after 31 hours and 54 minutes. This race took him a bit longer than he expected, and he blames the high altitude for his longer finish. He said it felt like he was expending the same amount of energy as normal, but wasn't getting as much run from the energy. The elevation was crazy. The highest point was almost 10,000 feet and the lowest was around 5,000. Much higher running conditions than he is used to. He earned another belt buckle for his finish and he is already considering his next race. He is NUTS!