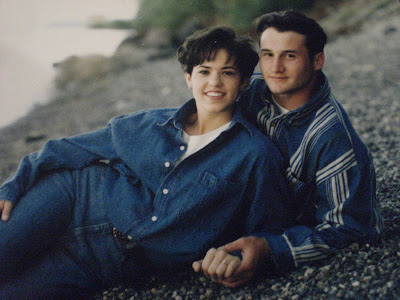 (Obviously, this is the only picture I have in digital form of us engaged, I apologize.)
...on this date, April 24th, it was a Sunday. High Council Sunday to be exact, and I went to church just as I had any other Sunday. As I entered the chapel, I noticed a rather dashing young man sitting on the stand. I soon found out he was Brandon, a return missionary who would be speaking to us about his mission experiences.

I was 17 years old, a senior in high school, he was 21, a return missionary who had come home from his mission in Scotland a few months prior. Except his return home was unique, and unlike any other I had ever heard of. While on his mission and in his 19th month, he was in a terrible car accident and was thrown from the car. The experience left him in a coma for two days and unable to walk or talk when he awoke. He spent the next three weeks in the hospital there and then returned home in a wheelchair, only to enter the hospital again for respiratory complications.

He spent months in therapy learning to walk and talk again, and once able to speak and walk was asked to speak as a High Council companion at my ward. I was so enthralled by his talk and the experiences he shared, and was impressed with his encouragement to all young men to prepare themselves to go on a mission. I remember he promised them that it would be the best time in their lives and that they would never regret serving two years. I, of course, was also amazed at the progress he had made in only a few short months since being in a coma.

As soon as the sacrament meeting ended, I made my way up to the stand to shake his hand and tell him how much I enjoyed his talk. I guess you could say I was bold. Later that day, my family was having dinner at my Uncle Loren and Aunt Denise's house, and we were all talking about how cute he was and asking them questions because Brandon was in their ward. About that time, Loren received a phone call from Brandon's father, and he had some questions about me. Mainly...how old I was. Understandable.

That night there was a stake missionary fireside and I went with some friends. Brandon was there, and after making eye contact across the room, he finally approached me and asked me out on our first date. That first date was just three days later, pizza at the park, and it was perfection. Exactly three months after that first date we were married in the Portland Temple.

Brandon is my best friend and I love to spend time with him. He makes me laugh, he loves me when I'm not very lovable, and he treats me like his queen. I am forever grateful that he is in my life and that on that April 24th, 1994, I had the guts to go up and introduce myself.

Update: My mother posted a much more lengthy, detailed version of this story from her point of view, you can check it out here.
Posted by Marilyn at 4/24/2008