I need a vacation!

Seriously! I am exhausted. It is so true that when you return home from a vacation is the time that you need a relaxing, do nothing, vacation. We traveled through 6 states, stayed in 6 different hotels, we put over 2300 miles on our rental mini-van, and drove over 30 hours. But it was so much fun, and we created so many wonderful memories. And that is what it's all about, right?

I have been trying to decide how I want to record on this blog, the experiences we had. I could drag it out into a multi-day series. We took over 300 pictures and video and visited four major US destinations. I could spend days talking about everything in detail. Or, I could just do one big post and give the highlights, and share my favorite pictures. And, since it's been two weeks since I've posted, I've got a lot of other things I desire to post about. So I'll go with the one day, long post of the highlights. Bear with me!

We spent three days at the Disneyland parks, hopping back and forth between the two. Disneyland was everything I had remembered and SO much more. I cannot stress enough, that if you have a little girl about age 5-7, Disneyland is completely magical. It was so much fun for us to see everything through Lily's eyes. She is still so innocent and naive, and believing. Luckily, she was also just barely tall enough to go on EVERY single ride, and that made Disneyland so much fun for all of us. We were able to ride as a family on each adventure. Lily started out being a bit afraid on some of the big roller coasters like Splash mountain, but by day three, she was a pro, riding with her hands in the air and screaming with the rest of us. It was so much fun. 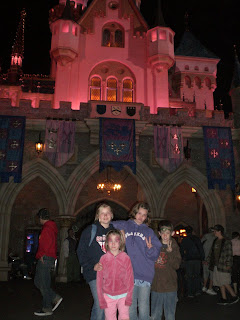 As far as California Adventure is concerned, they have some really fun rides that are definitely aimed at older children, and so she, and I, were unable to ride some of those rides. Disneyland was better suited for her, but Madeline, Jocelyn and Ethan had a blast riding California Screamin' and the Hotel Tower of Terror. 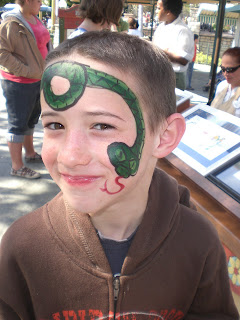 Ethan and Lily both wanted their face painted at Disneyland. $26 later, they were transformed. 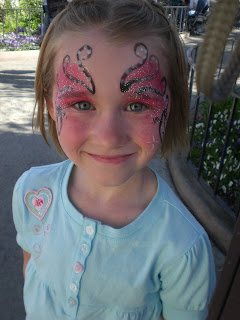 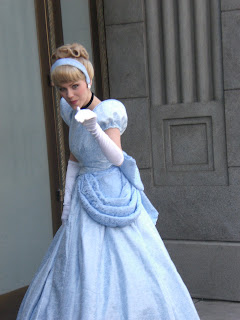 This was the closest we were able to get to Cinderella. Lily was so close to getting the photo-op I dreamed of, but Cinderella's "people" were dragging her away, so the Princess just waved to Lily. That was enough to put Lily on cloud 9, but I couldn't help being a little bit bitter that her "people" wouldn't oblige a little 6 year old with a photo of a lifetime. 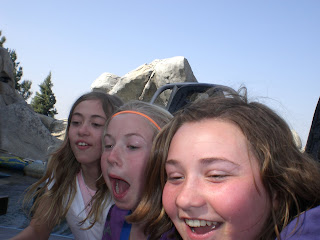 The Disneyland parade was excellent, and the only chance we had to see ALL of the princesses, including the newest Disney Princess, Giselle from Enchanted. One of the highlights was the fireworks show over Cinderella's castle. Watching Tinkerbelle actually "fly" over the castle was simply amazing, and Lily was awestruck. So were we. Disneyland is Magical!

As Danyelle posted, we were slightly disappointed in Sea World. Maybe it didn't measure up to Disneyland, maybe it was too expensive, maybe we were all having a bad day? I don't know, but we ALL were disappointed. Shamu was excellent of course, and the kids sat in the 4th row, also known as the "soak zone." And soaked is what they got. Completely dripping wet. We took off Ethan's shirt and rung it out, because he was miserably wet. But that is what you get when you sit in any of the first 16 rows. Brandon and I sat much much farther back. It cost us $350 to get into Sea World, and we all left wondering if it was worth it. 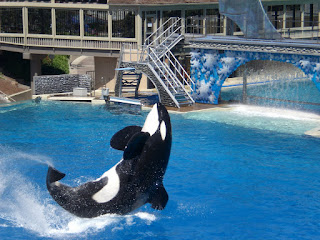 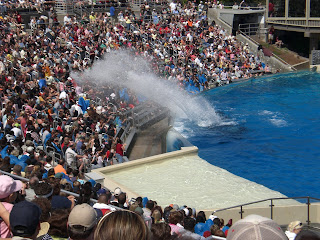 The kids were sitting in the 4th row, directly under this wave of water. This happened approximately 4 more times. THEY WERE DRENCHED!
Easter in Arizona
After San Diego, we headed to the Mesa area to visit Marshall and Kary and their girls. Arizona was 80-90 degrees and it was lovely. We were hearing reports of how cold it was back here at home and we were grateful to be in the sunshine. We had fun eating out and visiting family there in the Mesa area. Marshall and Kary also announced that they are expecting baby #3, another girl and we are thrilled for them. They make beautiful babies. We had a lovely Easter with them. 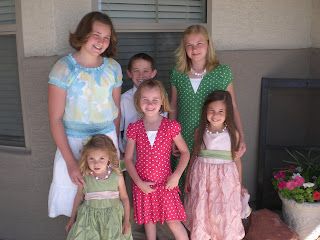 Next we headed to the Grand Canyon, only 4 hours north of Mesa. We arrived there at night and it was freezing. When we woke up the next morning it was 26 degrees. A shock to our system after Mesa's 90 degrees. Brandon ran down the canyon to the Colorado river and back up to the rim about 7.5 miles each way and that was pretty much the highlight of his trip. He's pretty much crazy. Once he returned from running we all headed to the Canyon to see the breathtaking views. Amazing, and scary to watch your children stand so close to one of the largest cliffs in the world. I was pretty much a nervous wreck. 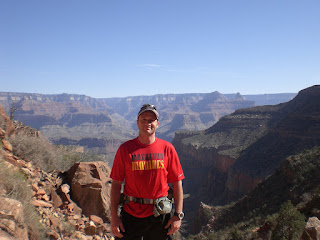 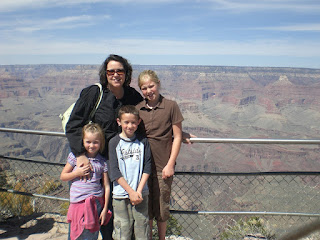 Only 8 hours further north was Temple Square, so we made our way north and found a great hotel with an indoor pool. Swimming could be the theme of our trip, because at every hotel we stayed in, the kids swam and swam and swam. A hotel with a pool was a must!

Touring the Conference Center for the first time was such a great experience and I felt a strong witness that President Hinckley was inspired to build that great center. I will enjoy so much more watching General Conference this weekend after having just been there. 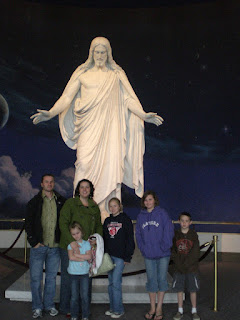 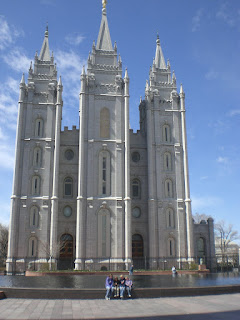 We woke up the next morning to a blizzard. Snow. Great. We were not prepared for snow. But, luckily, it subsided and the sun came out and we headed back to Temple Square to view the Joseph Smith film. This was the highlight of the trip for me. To sit with my family and watch this incredible film, and watch my children be moved to tears as they watched the story of Joseph Smith was an experience I will never forget. I am so grateful for the restored gospel of Jesus Christ and the guidance that I receive as a mother because of the teachings of Latter Day prophets. So grateful.

While in SLC, I had the chance to meet a couple of blogging pros (C Jane, Azucar) whom I admire. It was a blast to have lunch with them and get to know them face to face. I appreciate the time they took from their schedules to meet me, and I had a wonderful time visiting with them.

After all of that fun, we made the 10 hour trek back home, and it was so good to sleep in my own bed again. Trips like this are expensive, but worth every penny. I know that my kids will treasure the laughter and fun, as well as the quarrels and tears (there were bound to be some with that much driving.) In the end, I felt this overwhelming sense of love for my family, and an intense appreciation to live in this beautiful country.
Posted by Marilyn at 3/31/2008