I love fall, I do. But for me, October is really just a countdown month. I'm not that into Halloween, and so in October I am just counting down the days until I can begin listening to Christmas music. Out of my 5200 song music library, almost 20% of that is Christmas music. Crazy? No, I listen to almost all of it every year.
On November 1st, I will be on cloud nine as I switch all of my playlists to Christmas ones, and I listen to Christmas music every day until about December 27th. Crazy? No, I have an uncle that starts listening to Christmas music in October and that is crazy.
But the music industry does like to torture me a bit by releasing Christmas albums in October, and on Sunday, my sister in law Melanie told me that Josh Groban's new Christmas album came out last week. I listened to the samples on iTunes, liked it, downloaded it, and so I am reviewing it today for you.
I've been a Josh Groban fan ever since his first album, and I've seen him in concert. The concert was good, but not Michael Buble good. I prefer Josh Groban on album. This album is no exception. It is excellent. I'll give you just the highlights (in my opinion), but I found a great review here. 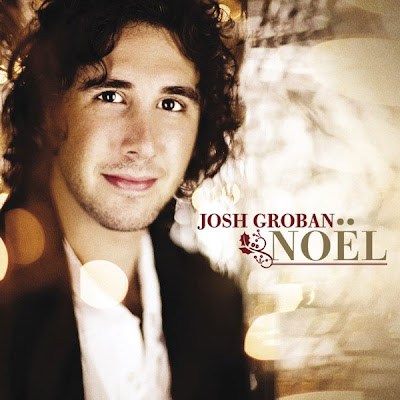 My favorite song from the album is an original song written for Josh by David Foster (and others). It is called "Thankful", and besides being beautiful, it has meaningful lyrics...

Somedays, we forget to look around us,
Somedays, we can't see the joy that surrounds us,
so caught up inside ourselves,
we take when we should give,
so for tonight we pray for,
what we know can be,
and on this day we hope for,
what we still can't see,
It's up to us, to be the change,
and even though we all can still do more,
there's so much to be thankful for,

Look beyond ourselves,
there's so much sorrow,
it's way too late to say I'll cry tomorrow,
each of us must find our truth,
it's so long overdue, so for tonight we pray for,
what we know can be, and everyday,
we hope for, what we still can't see,
it's up to us, to be the change,
and even though we all can still do more,
there's so much to be thankful for,
even with our differences,
there is a place were all connected
each of us can find each others light,

So for tonight, we pray for, what we know can be,
and on this day, we hope for,what we still can't see,
it's up to us, to be the change,
and even though this world needs so much more
there's so much to be thankful for.

Josh also sings "O Come All Ye Faithful" with the MoTab and it is gorgeous, definitely one of the highlights of the album. He also does interesting duets with Brian McKnight (Angels We Have Heard On High), and Faith Hill (The First Noel). I wasn't sure how he would sound doing a contemporary Christmas classic like "The Christmas Song", but he pulls it off nicely. The guitar and violin in that one won me over.

His voice suits songs like "Ave Maria", "What Child Is This?" and "Silent Night" very well, so of course those are perfect. If you are a Josh Groban fan, then you know he favors multi-lingual albums. This album is no different. There are two songs that fit that bill, one in French, "Petit Papa Noel", and one is Latin, "Panis Angelicus".

I know some people don't appreciate Groban's "operatic" style, but I love his powerful voice, and I'm pretty sure he'll be around for a long time. I'll enjoy this album for years to come. Crazy? No, he's got mad skills!
Posted by Marilyn at 10/16/2007