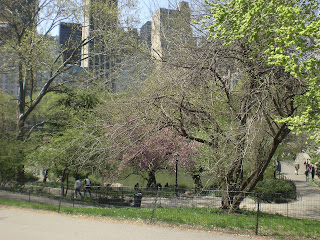 (Central Park in the Spring)
This was our last full day in New York so we really wanted to cram as much into the day as possible. We did some shopping and I bought some adorable red jewelry at a little jewelry store on the way to Times Square. Mom bought some gorgeous turquoise jewelry. Then we decided to take a carriage ride through Central Park, so we walked all the way up there from our hotel. That is actually a long walk. We stopped at little shops along the way, and right when we were close to the park we stopped at a European cafe and bought drinks and pastries. Once we were at Central Park, we hopped on a horse drawn carriage and took a stroll through the park, drinking sparkling pomegranite drinks and our pastries. It was gorgeous weather, warm and sunny with a slight breeze to keep it from being hot. Central Park was beautiful and we even saw Nate Berkus filming something there with a whole film crew and people surrounding him. That was kind of cool. 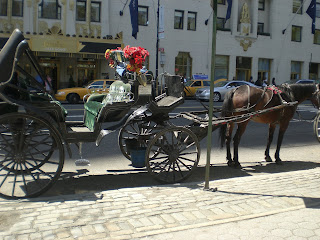 On our way back to Times Square we stopped in a shoe store and I found adorable red wedges to match my jewelry, this was just what I needed to finish off my outfit for the concert that night. 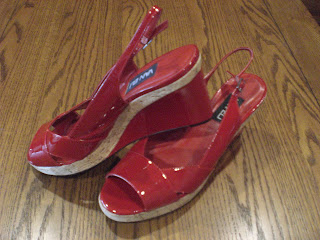 After that we walked back down to Times Square and found a tour bus to ride and take a tour of downtown Manhattan. It was perfect because our feet were getting tired and we needed to just sit and relax and see everything we needed to see. The tour guide gives you lots of interesting facts and info about all the sites we were riding past. For example, did you know that Macy's department store is the largest in the world with 2.2 million square feet of retail shopping space? It is GINORMOUS! 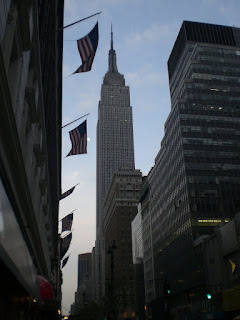 (This is probably one of the best pictures from our trip.)

This bus tour was a hop on/hop off kind of tour so you could get off and check out certain parts of the tour and then catch a different bus later. It worked out great because we really wanted to do some shopping in Soho. There are tons of great shops there and I even found a Kate's Paperie where I bought some cute scalloped cards. There are street vendors on the sidewalks everywhere selling cheap cheap cheap items. Are they stolen? Imitation? Who knows. Mom and I both bought name brand mens cologne for our husbands for $5 each. Some say we are supporting terrorism, but it seems a stretch that the guys selling this stuff have anything to do with terrorism. 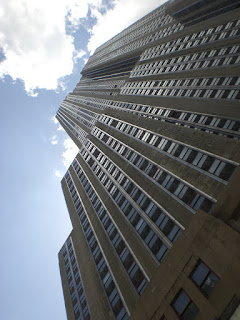 (Looking up from the top of the double decker tour bus.)

Anyways, we got back on the bus and got off at Grand Central Station right by our hotel. We dropped off our bags and went to find something to eat. We really wanted Indian food because that is one of my favorite foods ever. (If you haven't ever tried it there is an Indian place across from Ranch and Home. Go there and order the Chicken Tikka Masala with rice and naan bread. It is delicious.) We found an Indian place and the food was great, but this was a little hole in the wall place, and it was really hot in there. But the food was good and I guess that's all that matters.

Then we headed back to our hotel to get ready for the concert. We were so excited to go but we were also nervous because we hadn't received a confirmation e-mail yet detailing all of the info about the launch party. So I called Danyelle and asked her to get online and see if there was any info about the party. She found us some valuable info and we felt a little less nervous. Sure enough when we arrived at Webster Hall, our names were on the list and we got into the concert. It was a nightclub kind of atmosphere, people were drinking and there were 2 bars there. I would say there were about 400-500 people there. It wasn't a very big place and there wasn't any seating. It was just standing room only on the dance floor in front of the stage. It was really hot in there also. 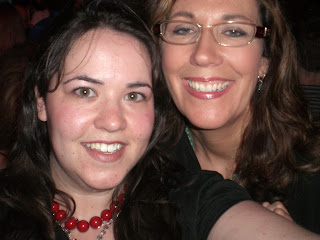 (Mom and I at the concert. Mom has this problem with camera flashes, they make her look drunk, but I promise she only drank virgin drinks.)

But then Michael came out and it didn't matter that there were no seats or that it was hot, because he was awesome as usual. I still felt guilty that I was there and Danyelle wasn't so I called her on my cell phone and held the phone up for several of the songs so she could listen. It was a great concert and he sang 11 or 12 songs, 6 of which were from the new album. It was just a little taste of his upcoming tour and I am really looking forward to seeing him on this new tour with new songs.

After the concert we took a cab back to our hotel, but we were still so excited from the concert that we couldn't go to bed. In the city that never sleeps, you CAN'T go to sleep at 10:00pm on your last night, so we walked back to Times Square and had New York Style Pizza (yum, yum, yum) and gelato. It was a great way to end an awesome evening in New York City.