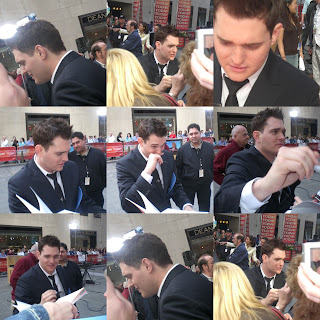 Well, we had planned to get up and go to the Today show on this last morning in NYC. Our plane didn't leave until 3:30 in the afternoon, so we wanted to see as much as we could in these last few hours we had left. The night before at the concert, we had heard people say that Michael would not be performing outside, it would be an in studio performance. Bummer! So after the concert I had called Danyelle to talk to her about it and she encouraged us to go to the Today show anyways. She assured us that he would probably come out to greet guests.

Boy was she right. We didn't wake up early, and we didn't make a sign, and we weren't sure what it would be like. But we took a taxi to the Today show and he dropped us off directly in front of the area where fans and spectators stand. It isn't very big and there weren't gobs and gobs of people. I was pretty shocked at how small that area is, it seems so much bigger when I watch on TV at home. We made our way through all the people and got ourselves on the side nearest the studio where they film the Today show inside, and we could see that they were setting up the band's chairs and music stands. Then sure enough, there was Michael, just standing around (actually he was hopping, I think he has a lot of nervous energy before he performs.) talking to people, getting his face touched up. We could see him, he could see us. When he looked our way I motioned to him to come out and sign the picture I had. He motioned back to me that he would come out in just a moment. So exciting.

We were standing in a group full of people who are in his fan club, just like us. They had all won tickets to the concert the night before as well. They were all very very friendly. Some, however, were very very odd. Like this one lady who said she had been to 22 of his concerts last year alone.

When Mom told her that people thought she was crazy for going to 5 concerts, she replied, totally serious...."I'm not crazy, just committed."

I beg to differ lady, you're CRAZY!

Anyways, Michael came out shortly and the Today show people tried to get him to go to the opposite side of the area, but he refused and stayed where we were. I think he knew we were the fan club area, and so I was right there, in the perfect spot to have him sign the picture I had brought. Madeline wanted me to get the picture of her and him together signed, and so he signed it. And apparently right at that moment the camera caught him signing my picture. I didn't even realize there was anyone filming it, until Danyelle called me later to tell me she saw me on TV. Then Brandon called, then Madeline called, and people from my ward called and left messages on my machine that they had seen me too. Crazy! 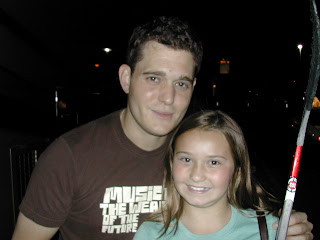 (This is the picture from last years concert that I had Michael sign for Madeline.)

Michael came out one more time and this time we got him to sign the ticket stub to the concert for Danyelle and he signed my iPod. I have always wanted to get my iPod signed by him, so I was so happy to get that one. He was very kind, as always, and took pictures with tons of people and signed every one's posters and pictures and spent a lot of time with the fans. He is really good about that. It doesn't seem like he takes for granted the people who really got him where he is today. I have been a fan ever since Danyelle introduced him to me in May 2003, and it has been cool to see him progress to where he is now. This 3rd album is the greatest and I just can't wait to see what he does next. I was really glad that we did decide to go to the Today show, it was an unforgettable experience.

After the Today show we walked to have breakfast at a little place called Cafe Metro. It is like an upscale Mc Donalds. We wanted to go to Tiffany's and we were pretty close, so we just kept walking. On the way there we passed Radio City Music Hall and guess whose name is on the marquee??? Michael Buble's. He will be performing there this summer. I took a picture. Check it out. 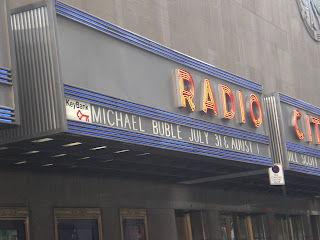 We finally made it to Tiffany's. There is armed security all over the place, at the entrance, near the elevators, walking around the store. Tiffany's is 6 floors of jewelry and fine things. It is beautiful inside, the displays are very cool, and the jewelry is breathtaking.............and flippin' expensive.

Pocket change. Very very few items show the prices, but a few do almost as if to tell the "just looking" customers like us, not to even bother asking to try things on. The customer service representatives were actually very friendly and weren't snooty at all, like I assumed they would be. They asked us several times if we needed any help, we of course told them we were just looking. After a few times of being asked, Mom said I should try something on just to say that we did, but I really felt nervous about trying anything on. The prices were very intimidating. Maybe next time. I did find a pretty sterling silver bracelet for only $100 that I liked very much, next time I might plan on saving $100 or so for Tiffany's, so that I can say I bought something from there. The flower arrangements inside were HUGE and very beautiful, I wanted to take a picture, but I felt like that would be inappropriate. It is very quiet and peaceful in there and I wasn't sure they would appreciate the tacky tourist taking pictures. And I really didn't want to be escorted out. So just imagine the beauty of the place.

There were people shopping there, mostly foreigners, and I couldn't help but wonder where do these people get all this money they are spending? It is crazy when you think about it. After all it is just jewelry. Beautiful jewelry.

We left there and headed back towards Times Square and came upon Trump Tower. We went inside just for the heck of it, and to use the ladies room. TACKY! That place is so over the top, decked out in marble, and fountains, and gold, and gold, and more gold. It just reeked of "I'm super rich and your not." There are pictures of Donald and his busty wife, Apprentice souvenirs, You're Fired souvenirs everywhere. I thought it was really tacky. Not impressed. 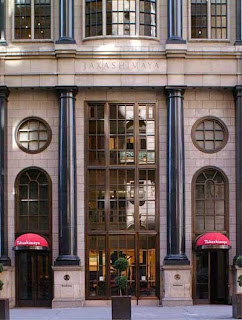 If any of you are DesignMom readers then you might remember this next place we went into. Takashimaya is a beautiful store. It was my favorite retail place that we went to. It is 6 floors, but still not very big. It is gorgeous inside, their displays are so pretty and they sell very unique and fine things. Their linens are so nice and they had children's clothing that were so cute. I bought a couple of pretty handmade Japanese style greeting cards. They were sampling some very wonderful smelling hand lotion. It was so scrumptious. I really want to order some very soon. If you ever make it to NYC, definitely go there. 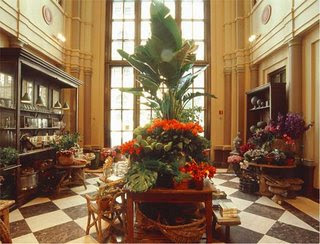 That was really the end of our time in NYC, after that it was time to go check out of our hotel and take a cab back to the airport. This was really one of the funnest trips I've ever been on and I really fell in love with New York City. All of the people we met were very friendly and I felt very safe the entire trip, so the rumor that New Yorkers are rude and not friendly? That was not our experience. I can't wait to go back again someday..........really soon!

Thanks for reading my long posts about this trip. I hope you enjoyed it!