There's nothing like the real world to jolt you back into reality after an amazing vacation. So I'm sorry that I am sooooo late posting today.

First of all I need to say how amazing my husband is for allowing and supporting me to jet-set cross country to see a Michael Buble show and spend a few days in NYC with my Mom. He is amazing. Really. Everything was perfect and clean and well taken care of while I was gone, and I so appreciate him. He's the best.

Now about NYC, we arrived at LaGuardia around 4:30pm Saturday night. That's a long time on an airplane. But they showed "The Holiday", and I love, love, love that movie. We were sitting next to a girl from Denver who was heading to audition in NYC for a play on broadway. She was so cute and we wished her luck. We took a taxi to our hotel, The Andrew Hotel, which was not on Manhattan but on Long Island. Mistake number 1. The hotel was nice, but the $150 we saved wasn't really worth it when you take into consideration the time and money it takes to get yourself into Manhattan. But we learned our lesson. We realized once we were there that one of the reasons that it was so hard to get a decent hotel room was because of the Tribeca Film Festival which was going on while we were there. But anyways, the hotel was very nice and we stayed there just the first night. Once we got checked into the hotel, we immediately headed to the train station across the street and met a very nice (very stereotypical) New York young lady waiting for the same train. Her name was Ally and she totally had the accent, and was like 22 years old living in the city thanks to the help of her wealthy parents who lived in the suburbs. She was so nice and sweet and helped us find our way through Penn Station and into Times Square. 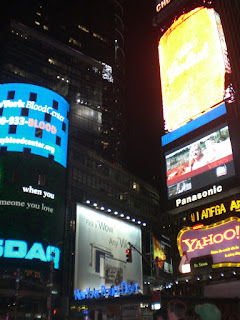 INTO TIMES SQUARE............those words give me chills. I will never forget that jaw dropping, eye popping experience. Times Square is just amazing. It is so loud, there are so many people, and the lights and the billboards are just huge. Everyone should experience that at some time or another. It really is the thing I will probably remember most from this trip. 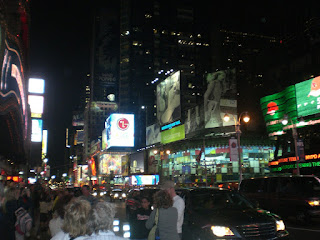 We were pretty overwhelmed with how big and crazy it was and it seemed like we would never find our way around. We were also starving so we just popped into the nearest place to eat. TGIFridays. I know. Not very New Yorkish, but like I said we were starving. The place was totally packed, and very loud. The menu is outrageously priced like $18.95 for a BBQ pork sandwich, but it was good. That's Times Square for ya! Overpriced. So when we got out of there we just basically walked around and saw all there was to see. My favorite spot in Times Square??? Virgin records. I was like a kid in a candy store, every music CD you can imagine, most of them priced at just $10. Every Broadway show, every new release, three stories of MUSIC! It was heaven. I'm pretty sure that is what heaven will be like (except probably no explicit Cd's, just a hunch.) 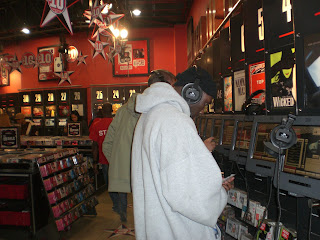 We headed back on the train to our hotel way far away from Manhattan. (Dumb us, we should have listened to you Alicia.)

The next morning we checked out of our hotel and took a cab to our better, closer hotel, the Fitzpatrick Grand Central Hotel. Right next to Grand Central Station. It was only a 15 minute walk to Times Square and it was beautiful. We had pre-booked a lunch/theater package and so we went to eat lunch at a place called The Center Stage Cafe. Great food, good atmosphere, excellent dessert. By then it was almost time for our first show, Hairspray, so we headed off to the theater.

Ok, whenever I go to a musical, it has this amazing affect on me. As soon as the music starts, I start to cry. I just get so excited and it is always so amazing that I just can't help it, I cry. I know, I'm weird. Hairspray is a MUST SEE. It is hilarious, has a terrific plot, the costuming and set are stunning, great characters, and the music is just seriously divine. I bought the soundtrack at Virgin, so if anyone wants to borrow it, just let me know. The lead character Tracy Turnblad was played by the adorable Shannon Durig, and the show was supposed to star Ashley Parker Angel as Link Larkin but for our show it was his understudy. And who cares, because he was brilliant and played the part perfectly. Alexa Vega of the Spy Kids trilogy practically stole the show though, she was STINKIN' HILARIOUS as the nerdy Penny Pingleton. I laughed so hard, and, of course, I cried.

After that, we found a great Asian fusion place to have sushi called Ruby Foos. It was gorgeously decorated and the food was delicious. We had chicken pot stickers, baja sushi rolls, and California rolls. (I'm getting hungry!)

We had to hurry out of there and go to our next show Chicago. It was really good, the music was excellent, and the singing was perfect, but I was expecting something different as for the way they presented the whole show, I can't really explain it, but it was just different than what I was expecting.

When we came out of the show, there was a line of taxis there waiting and a line of rickshaws (a guy on a bike, pulling a cart.) We talked one of the rickshaw drivers into giving us a deal, so get this, we rode a rickshaw through Times Square. It was crazy. But fun. The poor kid had to haul our heavy buts about 8 blocks back to our hotel. I felt for him. He was a nice kid, a struggling actor from Connecticut, his name was Aaron and he told us tons of interesting facts about the city and different landmarks as we rode past them. It was a very cool experience. We could have taken a taxi for much less, but then we could never say we rode a rickshaw through Times Square. It was worth it.

We were tired, very tired, so we went to bed. A lot of walking is an understatement. A ton of walking, I came home with 5 (count them), 5 blisters. I even wore my most comfortable shoes the entire time, well almost the entire time. Tip#1 for NYC, wear socks and tennis shoes, not ballerina flats.

Well that is all for now, I've got to make dinner. I am really sorry this has taken me so long to get posted. Life is crazy at our household! CRAZY!
Posted by Marilyn at 5/03/2007