Update: Mitch has discovered the world of blogging and is unleashing his thoughts for our enjoyment. Check him out here.
This year my brother Mitch shares his 29th birthday with Easter. Mitch is actually Mitchell, but I almost always call him Mitch. He also goes by "Mipitich", "Barg", and Brandon and I lovingly refer to him as "Argue Man". He should have been a lawyer. He can be extremely stubborn and he will play devil's advocate just to argue an issue. Although this all sounds really negative, he is actually one of the funnest guys to be around. He is passionate about politics, cars, golf, and of course his lovely wife Nancie (Nan), and his adorable boys Camden (Cam) and Jack (Jack-Jack). 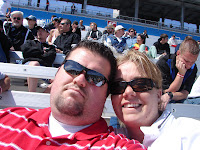 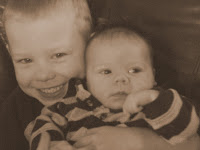 The thing that saves Mitch from becoming totally annoying is his sense of humor. He doesn't take himself too seriously, he does a killer model walk (ask him sometime, he would love to show it to you), and he can quote SNL, Adam Sandler and Jack Black movies like no-one else (except my other brother Marshall.) For a big guy, he is also an amazingly good, and graceful dancer. 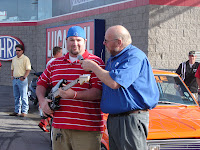 Being around Mitch is never dull and I enjoy spending time with him talking about politics, music, and stupid people (i.e. Hillary Clinton, Bill Clinton, Al Gore, John Kerry.) He is a great father, a worthy priesthood holder, and a loving husband. Here are a few things you probably don't know about Mitch.... 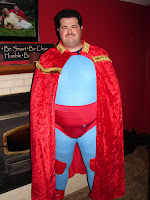 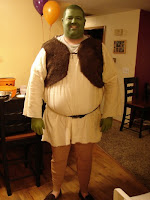 Favorite Color:
Orange
Favorite Place to Visit:
"Wherever I have a tee time, just kidding, I've always wanted to visit New Zealand."
Dogs or Cats:
Dogs (I really thought he would have some rude remark about cats, but he bit his tongue.)
Biggest waste of time:
Watching the results show on American Idol this year. (Amen, brother)
Favorite food:
Bratwurst
Most Happy When:
"Camden is pointing out cool muscle cars in my magazines and saying "Look it's Daddy's race car.""
What makes you angry:
Ignorance...and stubbing my toe.
Favorite Music:
Counting Crows
Favorite Music Album Ever:
Counting Crows: Across a Wire, Live in New York
Dream Job:
Crew Chief of a funny car drag team
How do you feel about the war:
"Although every war is tragic, the war in Iraq parallels very closely the mission of The Church of Jesus Christ of Latter Day Saints, which dictates that we send out thousands of missionaries to convert people to the truth."
Favorite movie:
Patch Adams
Favorite Hymn:
#82 For All The Saints
Worst Habit:
Speeding
One word that describes you:
Intelligent (he didn't really say that, but it's true.) 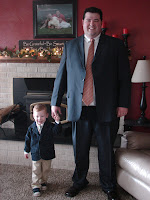