Saturday was Marshall's graduation and it was freezing. In Dallas. Totally freezing. I didn't even pack a coat. With the wind chill, it felt like it was 20 degrees. But anyways, the ceremony was really good. Because Parker is a private school they can open and close the ceremony with prayers and many of the speakers mentioned God and talked about gratitiude. It was a wonderful ceremony.
Marshall graduated with three degrees, in a little over three years. As I mentioned on Tuesday, a B.S. in Anatomy, a B.S. in Health and Wellness, and a Doctorate in Chiropractic. He was robed with the Doctors gown which has a velvet panel down the front and three velvet stripes on the sleeve. Only doctors wear this gown, and then he was hooded with the gray Chiropractic hood, the back of the hood has the school colors which in his case were blue and gold. (Marshall wanted me to explain this to my blog readers. Your welcome Marshall.) My parents are very proud of him and what he has accomplished and so are the rest of us. It was an honor to be there. 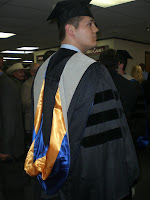 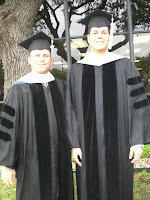 (Marshall showing his hood with school colors, and with his friend Trevor, who he will practice with in Arizona.)
After the ceremony, we took pictures outside in the freezing wind. Then we went to Marsh and Kary's house to have some mexican snacks. Bean dip, con queso, ceviche, chips, chips, and more chips. They kept reminding us not to eat too much because we were going somewhere very special for dinner and would need a full appetite.
After visiting and lots of laughter, we headed to Cabela's. The sportsmans super store was nothing like I expected. It was amazing. We could have spent hours in there, but only had about an hour and a half before our dinner appointment. My dad was like a kid in a candy store. (My dad does taxidermy for a living.) He couldn't believe all the taxidermy and either could we. Practically every animal imaginable was there, even African animals which was my favorite part of the store. I took about 100 pictures there and even some video because I knew Ethan and my girls would totally get a kick out of this place. If you ever have a chance to take your kids to a Cabela's, don't even hesitate, just do it. It is an amazing place. (In fact, we learned they are building one in Coeur d' Alene, so check it out when it is finished.) 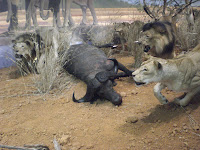 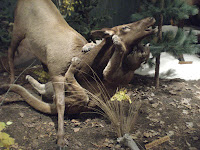 (Lions attacking a cape buffalo in the Cabela's African scene, and a cougar attacking a cow elk in the big game scene.)
After Cabela's we went to dinner. This place really deserves it's own post. We had dinner at Fogo de Chao, a Brazilian restaraunt that offers continuous tableside service. That is an understatement because you get tableside service from about 12-15 people. Actually they are Brazilian men dressed in "Gaucho" (Southern Brazilian cowboy) attire. These men have the look and accent to make you want to melt, and then they are offering you all the delicious food you could ever desire. In the words of Mitch, "I felt like they were seducing me."

I can't really even describe the overwhelming service and how royal it makes you feel. You really feel as though you are Brazilian royalty. I mean, I would take one sip of my limeaid(which was so good, by the way) and barely put the glass down, and there would be the waiter to refill it. No matter how much I drank, he was right there to fill it back up and I did not even have the opportunity to drink it down. It was crazy. And wonderful.

The gaucho's carry around 15 different delectable cuts of meat, inlcuding beef, pork, lamb, and chicken. My favorite was the bacon wrapped filet mignon. It was like eating butter. I am not kidding. It just melted in your mouth. How it works is you have this round chip, like a coaster that is red on one side and green on the other. If you want the gauchos to offer you more meat then you turn the chip over to the green side, and just wait to be overwhelmed with choices, have as much as you like, then turn to the red side when you need a break. When you would like to try something else, turn it back over to the green side and begin the overwhelming process again.

I haven't even mentioned the gorgeous salad bar. It was the mother of all salad bars. I have never seen anything like it. It was the size of my bathroom, and had food I had never heard of. We tried so many delicious things ,like pickled peppers (my favorite), artichoke bottoms, heart of palm, smoked salmon, chicken salad, every fruit imaginable, breads, and cheeses. So much more that I can't even remember everything. 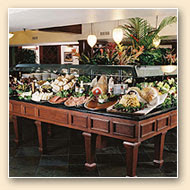 There were 11 of us and the bill came to $800.00, so it was the spendiest dinner I will probably ever have, but it was so good, I am trying to think of a reason to visit another Fugo de Chao someday. The desserts were equally wonderful, we tried things like turtle cheesecake, molten chocolate cake, wedding cake, papaya cream, creme brulee. It was all delicious, and it was an amazing experience I won't soon forget.
That was pretty much the end of Dallas, Day 2, stay tuned for more tomorrow.
Posted by Marilyn at 4/19/2007