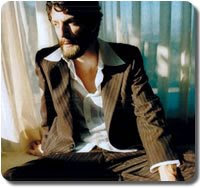 I have fallen in love with a voice. Ray LaMontagne's voice. It is beautiful.

In summer 2005, I watched the movie "A Lot Like Love" and immediately purchased the soundtrack (highly recommend.) Along with some other new-to-me artists(Jet, Aqualung), I discovered Ray LaMontagne's "Trouble" . If you're not familiar with this artist, you might recognize the song because on American Idol last week, Chris Sligh (love him), sang this song.

He is classified as a rock singer but I would add contemporary folk, adult alternative, and singer/songwriter. His first album is titled "Trouble" and has some good songs on it, but it is his follow up hit titled "Till The Sun Turns Black" which was released in August 2006, that I am really loving.

Check out these songs...

His voice has reminded some of Van Morrison, Joe Cocker, and Tim Buckley. Words like husky, sandpaper, rootsy, soulful, gruff, and bluesy have been used to describe his voice.
I just call it beautiful. Enjoy!
(P.S.) I changed some colors around just for the day, feedback?
Posted by Marilyn at 3/07/2007