Danyelle asked for posts about bravery. I have really struggled to come up with a reason I am brave. Maybe that's because I'm not. I really am a scaredy cat and a worry wart, not very brave. 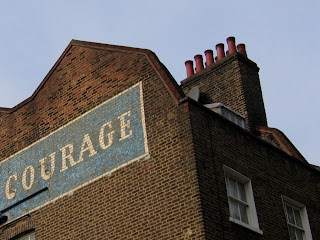 But then Stacia posted the definition of bravery, and I had an idea. "Bravery can mean: courage, the human condition to confront pain and fear." I have not had any huge, life changing moments of bravery such as Danyelle, Tiffani, Stacia, or Alicia. They are brave women. But I have done some things that were not easy, or that I was afraid to do, or that I am particularly proud of. So here is my list of 5 things that forced me to confront pain or fear....

So there it is, the extent of my bravery. But one thing that I think is important to remember is that we are strong, powerful people who have many opportunities to show courage and bravery, sometimes they are small, everyday things, sometimes they are big, life changing trials.

Todays song of the day really has nothing to do with this post, I just really like it!