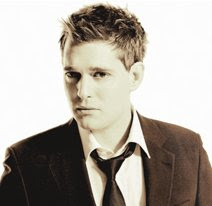 Holy cow, I am so excited! I just went to this site and they have announced the title of Michael's new album. "Call Me Irresponsible" . I just about jumped in the air because that is the title of one of my favorite songs sung by Bobby Darin, which probably means Michael will cover that song. Hooray! Ok, calm down Marilyn, it's just music...ok...calming down now.

So, the details are; that the new album will be out on
May 1st,
it will be titled
"Call Me Irresponsible",
and hopefully he will cover that amazing song!

The anticipation is killing me, and also presented me with a dilemma, what song do I play with this post? I could play Carly Simon's "Anticipation" , Bobby Darin's "Call Me Irresponsible", or the next song that was on my list to play,(yes I have a list), Michael's "Sway". So I decided to put all three on! You get to automatically listen to Bobby, and when that stops you can play the others. It's a smorgasbord of song!